It was a typical Tuesday morning in the Crabb Shack.  I had finished my 2 cups of coffee and my Bible study.  The day’s lessons were planned and I had carefully laid out all the necessary supplies for science experiments.  Breakfast would be made as soon as the first child stirred.  I was feeling pretty good about our day’s agenda and patting myself on the back because I had even managed to get a shower before the kids woke up; when I heard the words that make every mother’s blood run cold: “Moooooommmm….hurry!!!!  Nate’s puking!!!!!”

Vomit has a way of ruining the most well-planned, well-organized day.

Needless to say, not much besides school work got crossed off my list today.  I made soup, diffused oils, scrubbed any and all contaminated surfaces, and spent most of the day silently praying that this would begin and end with Nate instead of spreading like wildfire to the other 3 Crabblings.  A mom can dream, right?

I was in the process of scrubbing the bathroom for the third time this morning when our 13-year-old, Jimmy, appeared in the doorway to announce that he was ready for what hobbits and homeschoolers like to call “second breakfast.” He inquired about the possibility that I might help fend off his imminent starvation by making him an egg sandwich.  I immediately shot him the look.  I didn’t open my mouth.  I didn’t use a single, solitary word.  I “paused” mostly because my friend Lindsay challenged me to do this absurd thing on Facebook yesterday and I recognized that the moment I had been waiting for to successfully complete this challenge had finally arrived.  So, my only response to Jimmy was the look.  Jimmy responded to my look by announcing that he’d changed his mind.  He really didn’t want an egg sandwich.  He was just “gonna go have a yogurt & a banana instead.”  Smart kid.

As he walked away, a single thought ran through my brain: “He’s 13 years old…..What does he think I am?  His servant?”   A barely audible voice in my heart softly, but clearly whispered, “Yes…”  Immediately I closed the bathroom door, sat down on the step stool, and my eyes welled up with tears.

In that moment I realized that a servant is exactly what I’m supposed to be.  Not serving my family out of obligation, duty, or some archaic societal mandate.  Not serving them because I’m less valuable.  But serving them because they’re priceless to me.  I should be serving them out of love.  From a joyful heart that overflows when I get to do for others because of what has been done for me.  I flashed back to that moment, recorded in John’s Gospel, when Jesus tied a towel around his waist, filled a basin with water, and took the filthy, dirt-stained feet of his disciples in his hands. The One who would purchase their eternity with his own blood…just kneeling before them.  Like a servant.  I pictured Him going down the line.  12 men.  24 feet.  Even the feet of the man who would deny Him.  Even the feet of the man who would betray him. 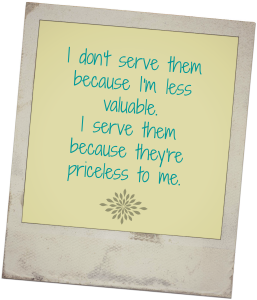 I whispered a confession….a simple plea for mercy and grace.  I opened the bathroom door, walked into the kitchen, kissed Jimmy on the head and asked him to forgive me, too.  I promised him an egg sandwich for breakfast tomorrow and he offered to wake up early and make them for all “the kids.”  I smiled and replied that I honestly couldn’t think of one thing I ever did in my life to deserve to be the mom to such an amazing kid….and yes, we would make those sandwiches together.

Today I’m thankful that I don’t have to be a servant to my family; but I get to.  I get to wake up every morning and serve the people that I love.  I get to make their meals, and wash their dishes, and take care of them when they’re sick.  I get to bless them every day and to be blessed by them in return.  I can’t think of any paycheck I could earn that would be worth more than this priceless thing that I do every day.

Thank you for the challenge to “pause” Lindsay.  Today, it made all the difference.