I have an incredibly special friend.  I met her almost 20 years ago while working at a summer camp.  Her name is Kathleen, but she’s notorious as “Kaster-woman” or “Kaster,” for short.  It wasn’t hard for us to get to know each other because she asked me exactly one million questions.  Sometimes they were trivial questions like, “What did you eat for breakfast today?”  “What is your favorite song?” or “Do you like dogs?”  And other times they were questions to determine the very essence of my soul like “Do you drink coffee?” and “What’s your favorite kind of ice cream?”  Within a few weeks she became my buddy.  So I reached out to her mom and asked if I could take Kaster out for coffee one Saturday morning.  We bonded over decaf and the song “Open Arms” by Journey.  And the rest, they say, is history.

Kaster isn’t like most people.  She’s what most would consider “special.”  She’s spent most of her life in and out of hospitals and doctors’ offices.  She’s had so many surgeries and procedures that I’m pretty sure her mom has lost count.  She’s been on and off of medications and suffered all their ugly side effects.  Her physical and emotional health have been a roller coaster.

But what makes Kaster special isn’t her “disabilities.”  In fact, over the years she’s shown me that “normal” people are more disabled than she is.  Most of us are crippled by fear, anxiety, and insecurity.  We panic about what others think about us or what they say behind our backs.  We obsess about having enough, being enough, and doing enough.  We are consumed with worry about our homes, kids, and bank accounts.  Our judgements and prejudices handicap us; rendering us unable to reach out and make friends of different religions, races, or socio-economic backgrounds.  But Kaster is free from all of that nonsense.  Every day that she wakes up is enough for her.  She’s never met a stranger.  She will talk to anyone about anything, anytime regardless of their age, gender, religion, or background.  She savors the simple things in life like music, ice cream cones, and sipping a decent cup of decaf with a friend.  She loves laughter, dogs, and her mom.  She gets excited to learn new things (Just last week she learned to shred paper and she called me ecstatic and eager to discuss how this completely changed her day!).  She doesn’t care how much money people have so long as they use kind words and treat each other well.  Kaster remembers everything people say to her because she actually listens to others when they speak.  She was heartbroken when we had to put our dog down because she has compassion and empathy for the suffering of others.  It has never occurred to her that others would judge her or think mean thoughts about her because she doesn’t judge or think mean thoughts about others.

When people refer to her as “special” I can’t help but laugh because they don’t know how right they are.  It turns out that a woman who most people would glance at and label “disabled” has the ability to show more love, compassion, respect, and kindness than most of the able-bodied, sound-minded people I’ve met.  Getting to know Kaster has convinced me beyond a shadow of a doubt that God DOES NOT make mistakes.  She’s exactly perfect, exactly the way that He created her.

Kaster celebrated a milestone last weekend–her 40th birthday!  She’s a walking, talking miracle. She and her mother have touched the lives of more people than I can count.  I’m thankful for every special memory I’ve shared with her over the past 20 years.  I’m thankful for the cups of coffee, ice cream cones, bowling outings, pajama parties, and phone conversations we’ve shared.  I’m thankful that she stood up for me as a bridesmaid at my wedding.  I’m thankful that the miles that separate us have never changed the love and closeness that I share with Kaster and her mother.  I’m honored to call such a special woman my friend. 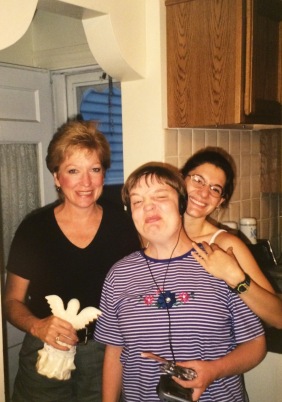