“Front row!  Turn around and spar with the person standing behind you!”  The sensei barked the command and every student in the front row turned and assumed their sparring stance.  I glanced up and almost fell off of my seat.  My little Ella–age 7–was deep in her stance, staring up and into the eyes of the tallest, oldest student in the class.  I tried desperately to shush the momma-bear within that instantly began to worry and panic.  And in the blink of an eye, I saw a look come over little Ella’s face that I hardly expected to see: confidence. She smiled a friendly smile, then got serious and she went to work.  She stared straight up into the other girl’s eyes and began to throw punches and blocks.  She wasn’t intimidated or afraid. 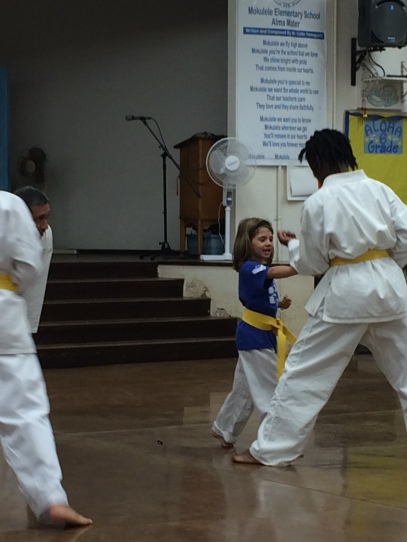 Before each class, they practice reciting their dojo precepts and their “basics.”  Each time the sensei calls out “Three basics for mental strength” the student must respond with “Seriousness.  Try hard.  Never give up.”  As I sat there watching my baby spar with her partner, I began thinking about these basics and what they look like in my life.

To be honest, I haven’t felt very ‘mentally strong’ lately.  I’ve been in this funky season of doubt, disappointment, worry, fear, isolation, and second-guessing.  I set a lot of high and lofty goals for myself at the beginning of the year and I’ve been spending a considerable amount of time mulling over all the ways I’ve fallen short.  Even though I’ve worked really hard and exceeded my own expectations in some areas, I’ve failed so miserably in others that I haven’t given myself permission to celebrate the victories.  Combine that with the very real burden of the 101 ways I’ve fallen short for others–the cards that never got mailed, gifts that never got sent, phone calls and emails that didn’t get returned, the bills that were paid late, the ceiling fans covered in a despicable layer of dust, the stains caked on the drip trays of my stove, and the fact that we went yet another year of homeschooling and I didn’t teach my kids a single, solitary Spanish lesson.  When I add it all up, the sum is “overwhelmed” every. single. time.  I have literally spent days on end wondering things like:

“Am I doing more harm than good by homeschooling my kids?”

“Does my family know that even though I haven’t returned their calls for 2 weeks that I think about them every day?”

“For the love of all the holy things are any of the people that I gave birth to able to smell the stench in the trash can or am I some freak of nature with a bionic nose?”

I don’t pretend to be the perfect wife, mother, daughter, sister, friend, or writer that ever walked the face of planet Earth.  But what I am is a mom who wakes up every day fully committed to teaching her children something new.  My daughter might be quicker at her times tables if she had a better math teacher than me, but no teacher would have the time to sit beside her for all the hours I did to find 57 ways to show her 6×2 using fruit snacks, teddy bear counters, and pieces of Halloween candy.  My ceiling fans might be free of dust mites if I hadn’t cooked all those dinners, matched up all those socks, or spent all those hours in the car driving kids to activities that teach them the value of dedication, practice, and hard work.  I could have spent less time reading the news and more time returning phone calls.  If I had stayed up an extra half hour the bills might have been scheduled to be paid on time.  There are a million ways that I could be better at doing what I do, but there are also a million ways that I am succeeding in what I do and those deserve as much of my awareness as do my failures.  The lie that says that my failures outweigh my victories is nothing more than the voice of the Enemy who would love nothing more that for me to take my eye off of the prize and not finish the race.

As I watched Ella take on her partner without a moment of hesitation, I slowly began to let myself off the hook for the first time in a long time.  I wondered if maybe the fact that my little girl can “try hard” and “never give up” has something to do with the fact that I don’t either.  Maybe she isn’t just modeling what she recites before her karate class.  I’d like to believe that it has a little to do with the fact that she wakes up every morning and sees a mom who gives 110% to the people she loves and who takes her failures with as much grace as her victories.

Whether you’re a homeschool mom, stay-at-home-mom, working mom or not even a mom; if you find yourself reading these words today and you’re weary from the battle please do us both a favor:  pour yourself a cup of coffee and sit for just a moment.  Put the voices that tell you you’re not enough on pause for as long as it takes for you to take stock of all the ways that you are exactly enough for the people you love.  Stop measuring your success on the things you’ve accomplished this month or this year and instead measure how hard you tried and your determination to succeed and let those add a few points to your momma scoreboard.  I promise you won’t be sorry.