Every year I do it–I pick just one, small word.  I call it my Focus Word, mostly because I’m not creative enough to come up with a fancy name for it.  It’s one word that sums up all my intentions for each new year.  I use the word to keep me grounded, challenge myself to reach my goals, and as a reminder of my priorities.

In my world, “resolutions” are for chumps.  I gave them up after the 165th time I wrote “Organize Family Photos” on the “New Year’s Resolutions” page in my journal.  I remember sitting on the couch in my family room when I had an epiphany that went something like this:

I suck.  I will never actually complete this task unless and until all of my kids grow up and leave me, I have no dog to walk or floors that need scrubbing, I’ve eaten all the snack food I can find, worked out like a boss, and there is nothing good on Netflix.

So right then and there I gave up making promises to myself that I have absolutely no intent to keep.  And since that time I’ve been choosing just one word instead.

Except this year, I didn’t choose my own word…Someone else chose it for me.

The first time it popped into my heart was in the middle of a Beth Moore broadcast that I had DVR’d back in October and never watched. Then it would show up when I wasn’t even looking or listening for it.  A scripture here. A verse there.  I started hearing it in sermons at church, in the middle of a song on my iPod while running, and one night it nearly jumped off the page of a book I was reading and bit me on the nose.

Over the weeks that followed, God started showing me the areas of my life and some specific relationships where my commitment had been lacking.  And He graciously revealed some areas and relationships where I had over-committed myself but I was having a hard time admitting that it was time to let go.  At the most random times, I heard His still, small voice speaking to my heart:

While washing my hair–Commit to your health.

Driving my girls home from gymnastics–Commit to your gifts.

Sitting on the beach watching the sunrise with my sister-in-law–Commit to Me. 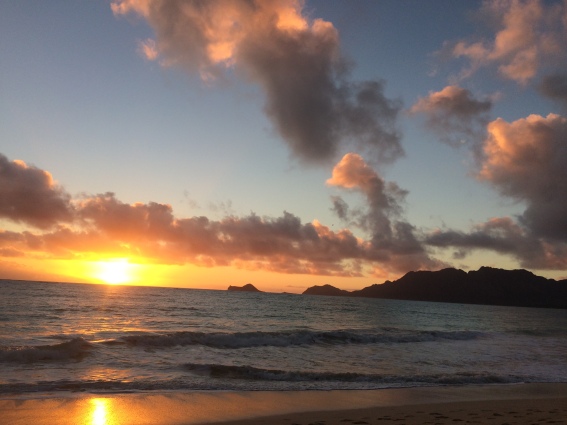 All in all, there were five.  Five random moments.  Five not-so-random calls to commit.  I wrote them all down–scratched some in my journal; typed some into a note on my phone.

I’ve been staring at them for weeks.  Thinking.  Praying.  Questioning what all of this might be about.

And then, amid the squeals of my kids and my nieces, at the very bottom of a majestic waterfall, my eyes fell upon the final piece of the puzzle.  Built by the hands of a stranger;  left as a reminder for me.

It stood like the stones the Israelites carefully, deliberately placed in the early pages of Joshua’s book.  The ones they stacked up tall to mark the miracle of the once-raging river being transformed into parched, dry land for their feet. Those ancient rocks stood as an ever-present reminder for them of His faithfulness when they passed by; providing them a perfect prompt by which they could recount the miracle of their first steps into the long-awaited Promised Land for their children, grandchildren, and great-grandchildren.

The message was as clear to me as the water pooling around my feet.  My call to “commit” is about choosing each and every day whom I will serve (Joshua 24:15).  It’s about taking the first step away from last year’s doubts and failures toward a new season of victory and peace.  It’s about choosing whether I will wander the wilderness of lukewarmness, mediocrity, anxiousness, self-doubt, and excuses or bravely stride toward my own promised land where faith, excellence, and an abundant life await.  It’s a call to mark each step forward with a stone of gratitude and grace so that someday my children, grandchildren, and great-grandchildren will retell the story of what the Lord did with this one, crazy, messed-up woman who chose to live each day for the glory of the One who blessed her with a life she did nothing to deserve.

I have no doubt the journey will be arduous because Jesus said so himself: “In this world you will have trouble…” (John 16:33).

But I’m committed to seeing it through to the very end.

2 thoughts on “One Word”