Pencils without erasers. They are my pet peeve.  No less than 30 times in any given school year (okay, maybe 30 is a slight exaggeration…) I load my 3 homeschoolers into our van and off to Target we go. This mid-schoolday trip forces us to endure the side-eye glances of curious shoppers that seem to ask “why aren’t those kids in school?”  On days like this we have a single, solitary goal: Purchase new packs of pencils with beautiful, unused erasers atop; bring them home, sharpen them, and get back to math.

Lest you think of me as a wasteful individual who would pitch a pencil in the trash simply because it has no eraser, I would like for you all to know that I have tried to solve this eraserless pencil situation in a variety of ways. For example, I’ve tried the cute little multi-colored pencil-top erasers. You know them well. They are the ones that no matter how hard you press they erase virtually nothing and then the pointy tip snaps off {because who on God’s green earth thought a stinking pencil eraser tip needed to be so tall, anyway?} rendering it completely useless. And, yes, I’ve tried the cute little pink handheld ones. I’ve even bought the multi-colored ones so each child can have his or her own and no one will fight over which one belongs to whom. But even this is futile because apparently my children see a blank eraser as an artist’s canvas—just waiting to be drawn on and poked full of pencil holes—a surefire opportunity to procrastinate the inevitability of math…

Lately, however, I find myself staring at the eraserless pencils that sit in the middle of our classroom table. And the longer I stare at them, the less of an annoyance they seem. In fact, they’re beginning to look more and more like a reminder….

I don’t know about you, but I have entire segments of my life that I wish I could take an eraser to. My high school years, for example, were filled with rebellion, self-imposed chaos, and just plain stupidity. I can easily list no less than 1,000 moments where I was hellbent on self-destruction that I wish I could erase. Sure, there were shining moments of redemption mixed in. But rest assured, my stupidity ran so deep during these years that I often found a way to sabotage them. Take, for example, the time I bestowed upon myself the title of “Biblical scholar” exactly 5 minutes after I accepted Jesus as my Savior and proceeded to tell all of my family members and half of my high school (my peers AND my teachers) how they were headed down the highway to hell. Bless my heart. I wasn’t just the stupid type. I was the annoyingly stupid type.

{Praise God for the grace, forgiveness, and tolerance of others.}

Truth be told, most of us don’t just have a few pages but entire chapters of our lives we wish we could erase. These chapters are full of moments where we loved too little, talked too much, took things and people for granted, and used our own hurt feelings to hurt others. I’ve never met a person who didn’t have moments in their past that they regret. In every brutally honest conversation I’ve ever had with another woman at least one of us has uttered phrases like, “I hope my kids never find out about..,” “I don’t want to have to tell them that I..,” and “I wish I had never…”  Mistakes, failures, and regrets are an unfortunate part of our shared human experience and sometimes these things affect our lives much more profoundly than others. Some failures have consequences that sting just a little. Other mistakes have consequences that leave a lifetime of scars.

And the longer I ponder these pencils, the more convinced I am that it isn’t an eraser that we need at all. Erasers are for cowards. And I don’t know about you, but I am no coward. 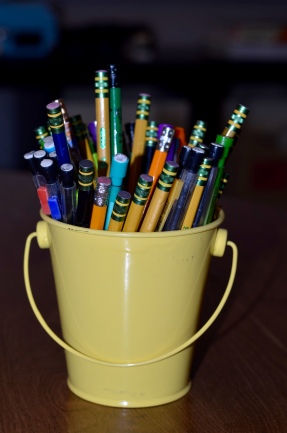 Brave people see the futility in trying to erase their mistakes. Instead, they gather all the pencils, rise from the table, and with shoulders back and chins held high, they march straight to the pencil sharpener. Then, armed with sharpened tips and blank pages, they begin to write. They pour all the lessons learned into new chapters. Wiser chapters. Chapters that aren’t filled with fluffy ideas and naïve anecdotes. They realize that they are not the only ones with a closet full of skeletons. For some of us the closet is mostly empty and it doesn’t take much effort to close the door. For others—myself included—a 2-ton boulder in front of the door is barely enough to keep it closed. But, rather than trying to hide or erase all the skeletons, brave people give each one a role in their story.  They fill the pages of their new chapters with real-life solutions, lessons learned, battles fought, and victories won.

Brave people realize how impossible it is to be brave all alone.  So they enlist the help of a Friend–One who sticks even closer than a brother.  They give all of their mistakes to the only One who is trustworthy enough to hold them. They confess and surrender them (as well as the crushing guilt they are often accompanied by) to a very skilled Potter who is more than able to take what looks like a messy lump of clay and turn it into a beautiful vase ready to hold fragrant flowers once again.

Brave people know that the primary purpose of a pencil is to write—not to erase. And whenever possible, they use their pencils to rewrite an ending or two because they recognize that the editing part is what transforms the work from a rough draft into a masterpiece.

So, be brave.  Enlist the help of a very faithful Friend.  Then, grab a sharpened pencil.  Our lives are masterpieces just waiting to be written.

4 thoughts on “Writing Your Masterpiece”